"I'm a Barbie Girl, in a Barbie World"

So I was reading my daily, "On this Day in History" and noticed a familiar face, and global icon... Barbie. It was on this day in 1959 that the first Barbie doll went on display at the American Toy Fair in New York City, my home sweet home. In the time that has transpired since, there has been a large mix of controversy, condemnation, and admiration  for the buxom blonde beauty.  Despite the controversy, and sometimes criticism, sales of Barbie-related merchandise continue to soar, topping 1 billion dollars annually by 1993. Since 1959, more than 800 million dolls in the Barbie family have been sold around the world and Barbie is now a "bona fide global icon", with a world of admirers. The question is, who is Barbie? Where did she come from? Is she a positive role model? Or is she just a fun toy for young women, dreaming of where they will live,  what will they do, and who will they be when they grow up? At a whopping eleven inches tall (and I thought I was short ;)) and cascading blond hair she was the first mass produced toy doll in the United States with adult features, and a body to boot.  Barbie was  and created by a woman named Ruth Handler, who went on to co-found Mattel, Inc. with her hubby in 1945.  She dreamed up the idea because her young daughter began to ignore her baby dolls, and played more with paper dolls of adult women.  Ruth predicted there was a niche for a toy that would allow young women to imagine their future (and that would be a massive understatement  accurately considering the enormous and timeless scale of success).

I have often wondered, who was she made to look like?    It turns out, Barbie's appearance was modeled on a doll named Lilli, based on a German comic strip character. Originally marketed as a racy gag gift to adult men in tobacco shops, the Lilli doll surprisingly became extremely popular with children. Mattel bought the copyrights to Lilli and made its own version, which Handler named after her daughter, Barbara. Mattel became a  sponsorship of the "Mickey Mouse Club" TV program in 1955, and therefore, became the first toy company to broadcast commercials to children. They ingeniously used this medium to promote their new toy, and by 1961, the enormous consumer demand for the doll led Mattel to release a boyfriend for Barbie. Handler named him Ken, after her son, which is a bit creepy if you ask me naming the son and daughter as boy friend and girl friend :P . Barbie's best friend, Midge, came out in 1963; her little sister, Skipper, debuted the following year. 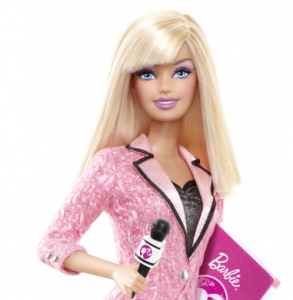 Like many beautiful and successful women, over the years Barbie generate huge buzz, and a lot of controversy!  On a positive note, many women saw Barbie as providing an alternative to traditional 1950s gender roles and image of Stepford wives. After all, the world was her oyster, she had a huge series of careers, from airline stewardess, doctor, pilot and astronaut to Olympic athlete and even U.S. presidential candidate. Perhaps even Barbie was ahead of her time!  Others however, thought Barbie's never-ending supply of designer outfits, cars and "Dream Houses" encouraged kids to be materialistic. I personally had the "knock off version of Barbie's dream house"  more of an apartment then a mansion really.  It is no surprise however that Barbie's appearance caused the most controversy. "Her tiny waist and enormous breasts--it was estimated that if she were a real woman, her measurements would be 36-18-38--led many to claim that Barbie provided little girls with an unrealistic and harmful example and fostered negative body image".  As an olive skinned dirty blonde/brunette at 5'1" I can tell you that I am far lacking when it comes to Barbie's image of porcelain skin,  height or proportions.

Researchers at the University of South Australia scaled up both Barbie and Ken, and found that one in 50 men would have Ken’s proportions, whereas not 1 in 100,000 women would have anything close to Barbie’s: if she were a real woman, she’d have such a small waist that she’d like only have room for half a liver and a few inches of intestines. Her legs are 50% longer than her arms (average woman’s: 20%), and her neck is twice as long as an avererage woman’s, so she probably wouldn’t be able to hold up her head. She’d have a BMI of 16.24 (18.5 is the lowest end of ‘normal’) and likely not menstruate – scary truth, she’d tick a few boxes for a diagnosis of anorexia.


So the question remains is Barbie a good role model for young women?  Does her pursuit and success  in any career she endeavors despite her looks make her a role model for success, in spite of beauty...or because of it?   Can we assume that her image is the paramount vision of beauty, if succesful sales marks votes? Or can she be just one example of "beuaty" amongst an array of  beauty which comes in all different packaging of heights, weights, skin colors (Etc).

Should barbies be banned? The Iranian morality police made headline news when they extended the long reach of the law to dolls, and has activated an official ban on the sale of Barbies.  The ban on the little doll produced by the U.S.-based Mattel Company, as well as the accessories she comes with, is part of the response to tightened sanctions against the Islamic Republic by Western nations. Muslim clerics had already succeeded in banning the curvaceous cutie in Saudi Arabia in 2003, outlawing Barbie altogether by declaring her “offensive to Islam.” 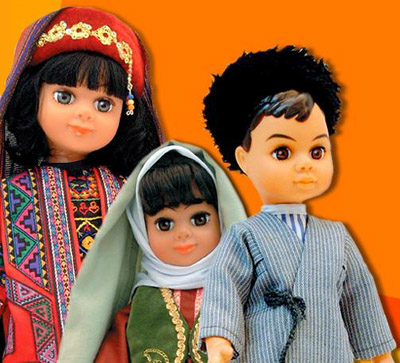 But Islamic leaders in Iran have been complaining about Barbie’s “destructive cultural and social consequences” since 1996.  Now, Iranians are being introduced to a new couple, albeit virtuous siblings, to replace Barbie and her friend Ken. Meet Dara and Sara- complete with a little head scarf for the eight year old Muslim girl doll.

According to a release published Monday on the Iranian Islam for Today website, “The Muslim dolls have been developed by a government agency to promote traditional values, with their "modest clothing and pro-family backgrounds". They are widely seen as an effort to counter the American dolls and accessories that have flooded the Iranian market.”

The report goes on to quote Iranian toy seller Masoumeh Rahimi who allegedly welcomed the dolls, saying Barbie was “foreign to Iran’s culture” because “some of the buxom, blonde dolls have revealing clothing.” Allegedly, the toy seller said young girls who play with Barbie, a doll ‘she sees as wanton,’ could grow into women who reject Iranian values.  “I think every Barbie doll is more harmful than an American missile,” Rahimi was quoted as saying.

The release points out that each of the dolls is supposed to be eight years old, “young enough under Islamic law for Sara to appear in public without a head scarf. But each of the four models of Sara comes with a white scarf to cover her brown or black hair.”  According to the report, some 100,000 dolls have been manufactured – in China – and each will sell for 125,000 rials ($15) compared with 332,000 rials for a “genuine” Barbie and 25,000 rials for a copy.  Is this taking things to an extreme?  I suppose this is a matter of culture, ethics, and personal opinion, and would leave this for you to decide. Personally I worry whenever any kind of censorship occurs, who decides where it ends?

Then there is the old adage, any attention is good attention. Barbie drummed up even more controversy in 2011 when released a Barbie doll designed by Tokidoki, a Japanese-inspired lifestyle brand, and it  stirred up a controversy because the doll, which sports a pale pink bob, is covered with tattoos on her neck and shoulders.

No doubt, there are plenty of people who will object to the doll, but this is not a mainstream Barbie product intended for young girls. The $50 doll is being marketed to adult collectors. Only 7,400 were made and, according to the Tokidoki Website, they are all sold out.  It also isn’t the first time "Barbie" and "tattoo" have been uttered in the same breath.  As a "chick" who digs tatoos, and has one of her own, I'm a fan. 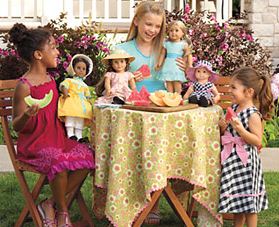 These days, there are plenty of other options on the market, such as the American Girl Dolls, promoting girls to "follow their inner star".  The dolls portray nine– to eleven–year–old girls of a variety of ethnicities. They are sold with accompanying books told from the viewpoint of the girls. Originally the stories focused on various periods of American history, but were expanded in 1995 to include characters and stories from contemporary life. A variety of related clothing and accessories is also available.  I think this is a great option to inspire young women and learn about the history of women's suffrage.

Spinning off of International Women's Day, and some fascinating research I found about women in IT, or the lack there of in my blog Talk Nerdy To Me.  The question is more layered then I have time for in this blog.  A clever point is raised in the fluffy dramitzation of  Elle Woods, Sorority Girl gone IV League Lawyer in "Legally Blonde";  Should we judge a book by it's cover? To play devils advocate, do women need to "look" a certain way to prove their intelligence (ie the Hillary Clinton Pant suit?), or is our society beyond that... are we?  I'm not so sure.

In the end, love her, or hate her, Barbie's here to stay!  I truly can see both sides of the story.  I admire Barbie's ability to appeal to young women to dream big, and go after any career or position there hearts desire.  She is of course beautiful, but in my humble opinion beauty is in the eye of the beholder, and she is just one example, as so eloquently demonstrated by the Dove's Real Beauty Campaign!  Maybe if beauty really does come in all shapes and sizes, we shouldn't condemn Barbie for her packaging, after all it should be what's on the inside that counts.

Email ThisBlogThis!Share to TwitterShare to FacebookShare to Pinterest
Labels: News