Who is Michelle Ragusa?

Posted by Michelle at 4:10 PM No comments:

Who runs the world... girls? 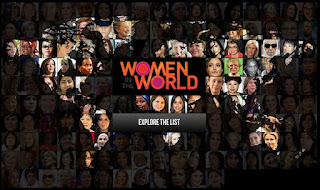 I am a fan of the iconic "Independent Woman" Beyonce and her latest creation- the epic pop video Runs the World (Girls) [music video link above].   CBS News was also smitten as they stated: “We got to hand it to Beyonce, she’s asking the right question: Who will run the world? She’s got the right answer too… Girls! … ".  Hopeful reviews, but the the question lies is that the case?

Stereotypes of the perception of women of yester year can be evidenced by stories passed down, and brought to life on the hit TV Sitcom Mad Men.  These images cause many to reflect on the fact that only 50 years ago, women in business were almost exclusively  telephone operators and/or secretaries – and many generally stayed in those jobs only until they got married. In the mid 1960s, only about 35% of women worked, and only 1 in 50 working women held managerial or professional jobs. "The grandmothers and grandfathers of the young women coming into the work force today expected that women, if they worked at all, would be secretaries, nurses, teachers, librarians, or possibly factory workers, and that they would only work if they “had” to – that is, if they didn’t have husbands who could be the family breadwinner" Forbes contributor Erika Andersen references in her very thought provoking analysis on women leaders which I will discuss momentarily.

That image of women can be debated when you look at these first professional pioneers:  full-time computer programmers who were all women,  hired for their math skills no less. "In 1942, when computers were human and women were underestimated, a group of female mathematicians helped win a war and usher in the modern computer age. Seventy years later their story has finally been told".  Please check it out here, Top Secret Rosies.  Thanks so much for my dear friend Karl Palachuk, for opening my eyes to their story. 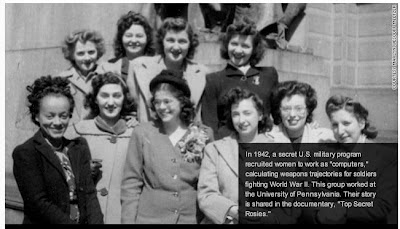 So what has changed in present day society?  According to Charlotte Beers, Research still shows that women of equal or superior qualifications are still less likely to run for senior positions, as compared to men with far inferior qualifications.  My last two blogs Chic and Geek, and Talk Nerdy to Me show the challenges women face in IT.  This infographic did a WONDERFUL job of collaborating all of that information and showing why we NEED more women in Tech, and signs of hope that interest is growing!  You need to see this:  Infographic on Women in Technology!

This got me thinking, was it just technology where women were less dominant or less likely to succeed in leadership positions-- what about a bigger picture?   If we take a look at government or legislature, would that show a more promising picture?

Maine Senator Olympia Snowe's retirement announcement was more than just a potential loss for the GOP (Republian Party), but it also gleamed as another reminder of how few women reach positions of leadership in American Government.  Let's get a visual by looking at the stats: 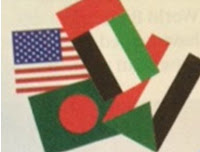 That certainly does not seem like a lot of female representation.  In fact, America ranks 71st behind Bangladesh, Sudan, and the United Arab Emirates for Female Representation world wide!

Well that was a bit of a surprise, so I began pondering Where do American Women rank in the world?  Here are some stats that surprised me, and perhaps will surprise you as well. 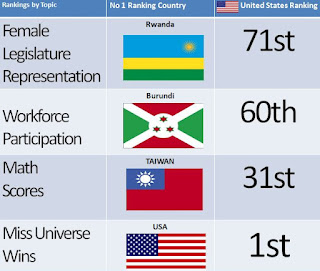 Why is this the case?  Are women not good leaders?  On the contrary, not according to Forbes recent article by Erika Andersen, entitled: The Results Are In: Women Are Better Leaders; based upon a research study evaluation by Jack Zenger and Joseph Folkmanthey of 7,280 leaders in 2011.

They studied a wide spectrum of leaders in a variety of positions – from ‘individual contributor' all the way up to the very senior management and top C Level Execs.  In the study, they asked others to rate the leaders in 16 leadership competencies.  "According to the data shared in the article, they found that women out-scored men in all but one of the 16 competencies, and in 12 of the 16, the women were better by a significant margin". And, in the words of Zenger and Folkman, “two of the traits where women outscored men to the highest degree — taking initiative and driving for results — have long been thought of as particularly male strengths.”  That was just the tip of the iceberg when it came to interesting finds in favor of women leaders. My past research was verified in this study,  as predicted there were more males:females in the study, with the imbalance increasing at the higher levels, as is the case in most corporations – at the highest level, a whopping 78% of the mangers were men.   Here is where the surprise came in- the women were seen as better leaders at every level. In Zenger and Folkman’s words: “…at every level, more women were rated by their peers, their bosses, their direct reports, and their other associates as better overall leaders than their male counterparts — and the higher the level, the wider that gap grows.”
This interesting study by Zenger and Folkman seems to demonstrate pretty robustly that women are seen as better leaders than men by those around them.  Additionally, there are other studies indicating that companies that have a higher representation of women in management ranks are more profitable and have higher employee productivity. And yet – statistically, and sadly, only 33 of the Fortune 1,000 are headed by women.

Mrs. Anderson presents the ever pressing question we are all wondering, "So, what’s the deal?  Why are women still so woefully under-represented, especially at the most senior levels?"  What can we do to change the statistics, and give women a more equitable – and, according to Zenger and Folkman, well-deserved – shot at the corner office?

According to the aforementioned infographic by IT Manager Daily, here are just some of the reasons they gave for why we need more women in Tech- but the same great traits, characteristics and principals can be said for having women in leadership in all careers. 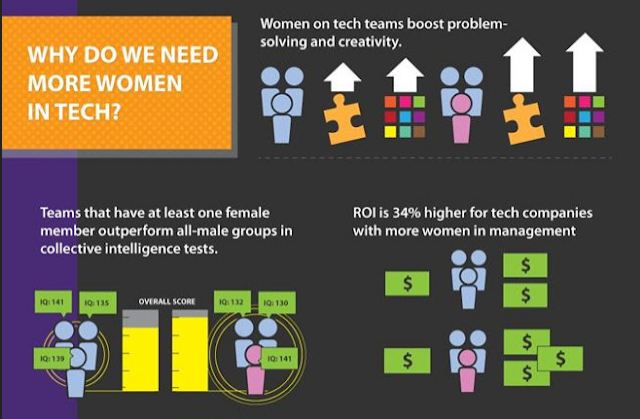 This should not be looked at as a pursuit of women to take away men's jobs, but rather improve the overall equality, and good of the organization which can benefit from the above-mentioned qualities:  helping to diversify intelligence, creativity, collaboration, and provide a fresh new unique way of looking at situations.  After all, this picture really resonated with me.  There is a picture of a man marching with a group of women, and he is holding a sign that says the most brilliant and honest statement I have ever seen:  " Men of Quality Are Not Threatened By Women for Equality" 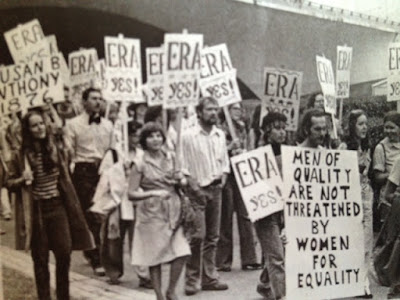 Email ThisBlogThis!Share to TwitterShare to FacebookShare to Pinterest
Labels: Technology, Women in Tech

Infographic on Women in Technology

Women in Technology: Triumphs and Barriers

Can women succeed in IT?

Women have recently taken several notable positions at the forefront of big tech companies. Unfortunately, they remain the exception to the rule. Statistically, and sadly, only 33 of the Fortune 1,000 are headed by women.

Learn about the presence – or lack thereof – of women in technology, from dismal numbers to inspiring success stories and resources for supporting ambitious, tech-minded women thanks to the awesome infographic by IT Manager Daily! 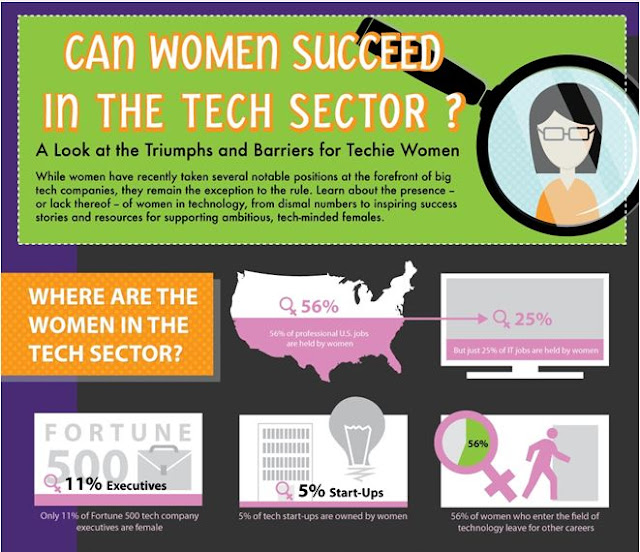 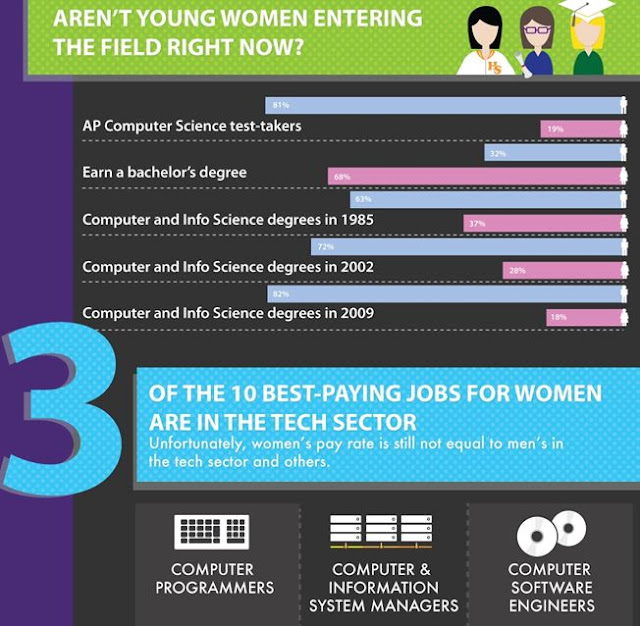 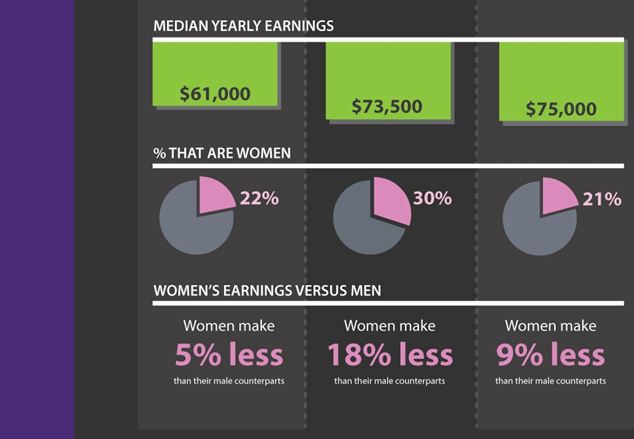 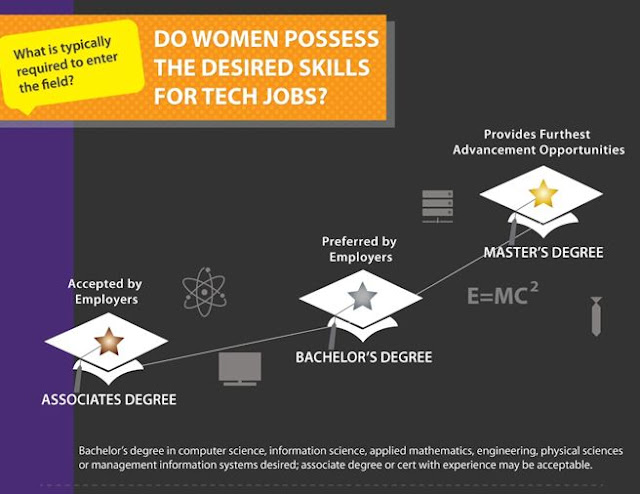 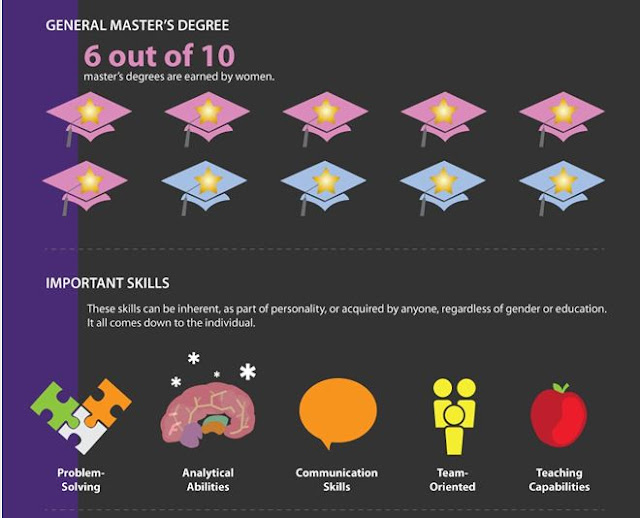 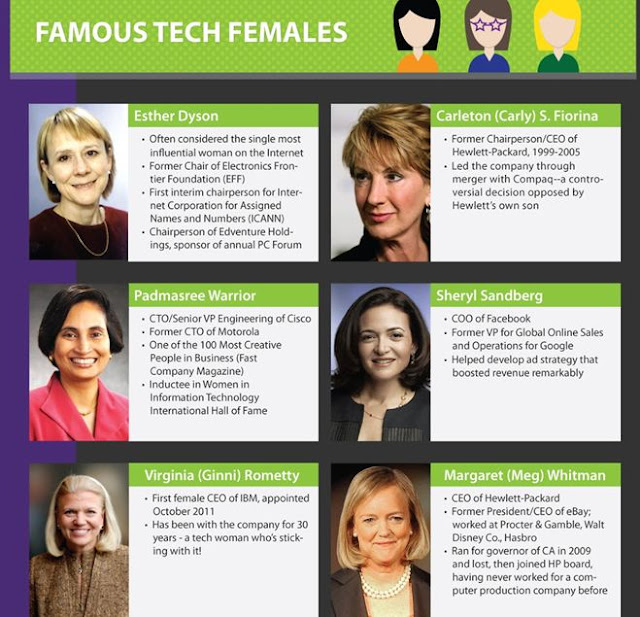 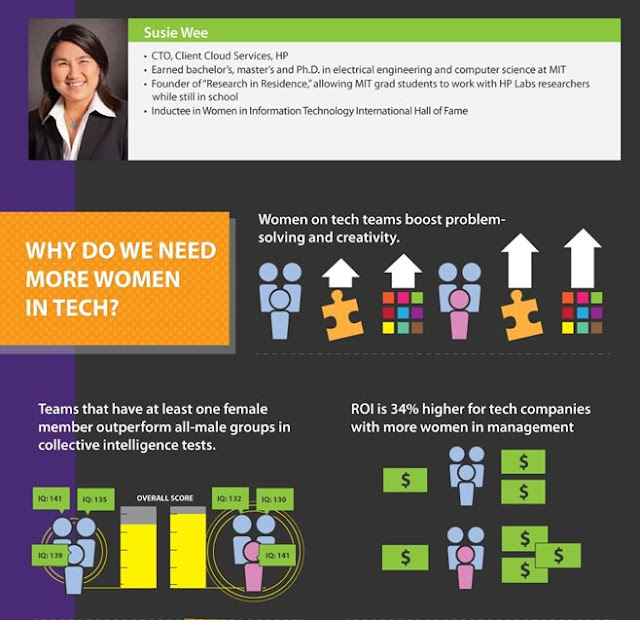 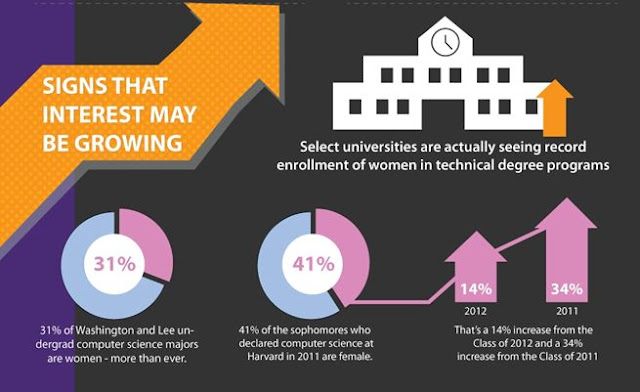 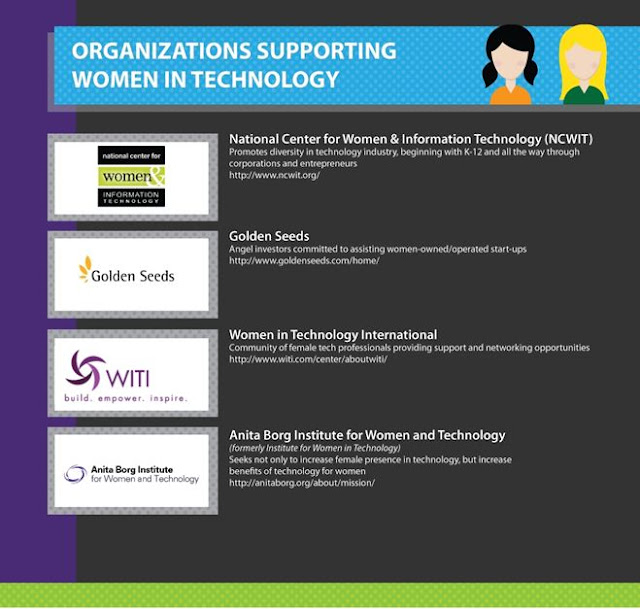